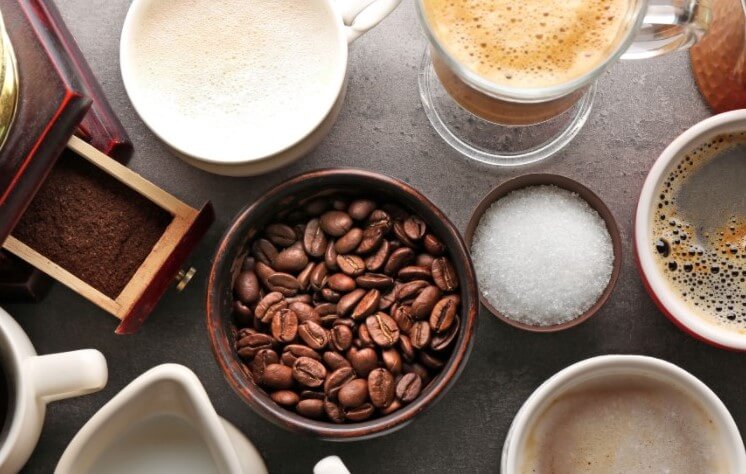 How much caffeine in tea: Yes, theine is caffeine by another name. And its quantity influences from the type of plant or its fertilizer to the temperature of the water or the infusion time. We solve all doubts with experts in this drink.

It began as a medicinal plant and ended up unleashing a series of commercial disputes, a riot that led to the independence of the United States or serious periods of smuggling, already as a drink for consumption. That anyone would say that we are talking about brandy or gin, and not about a handful of strands infused in hot water; And yet, there you have the tea: removing governments, seducing royalty, and expanding around the world since the 17th century. Almost nothing.

Have you ever wondered about the caffeine content of other foods besides coffee? How much does white tea provide? In this article we will detail it.

Did you know that in addition to coffee we find caffeine in white tea? Although its content is lower than the contribution of other beverages, it is an aspect to consider if you need to reduce its consumption.

Specifically, all types of tea that exist contain caffeine in varying degrees. In addition, they provide different antioxidant substances and come from a plant called Camellia sinensis. Thus, white tea is one of the varieties that can be obtained from it.

Does the tea have caffeine?

Yes, caffeine is present in both tea and coffee. When talking about the caffeine in tea, the term theine is sometimes used, but it is the exact same compound.

However, the effects of caffeine change depending on how it is taken. In this way, having tea and having a coffee does not produce the same sensation and this is both due to the concentration of caffeine and its interaction with other plant chemical compounds.

Why tea activates but does not make you nervous

If you are sensitive to caffeine, you have probably noticed that a cup of tea does not make you as nervous as a cup of coffee. Have you ever wondered why?

Tea has caffeine, but also theanine, an amino acid capable of producing a feeling of relaxation. Theanine is a psychoactive stimulant reducing physical and mental tension. In combination with caffeine, it improves attention span and concentration, achieving a state of “calm alertness”.

It is believed that the caffeine in tea is absorbed more slowly, this makes the period of effect longer and at the same time softer than with coffee.

Studies have also been conducted that suggest that it may play an important role in improving our body’s immune response. The study identified immunoglobulin levels 5 times higher in tea drinkers than coffee drinkers.

Theanine is marketed by several manufacturers in the form of a drink, but we better take the more natural option and have a tea, don’t you think?

Coffee wins, but which tea has more theine?

You have to start by saying that the only way to accurately identify the caffeine levels of a coffee or tea is through an analysis in a laboratory.

However, several entities related to the world of health and nutrition, such as the

Department of Agriculture of the United States or the European Food Safety Authority , venture to draw some general lines of caffeine content for each drink.

We already give you a headline. If you choose your drink solely for its potential to make you sleepless, the choice is clear: have coffee.

Generalizing, an espresso would contain about 80 milligrams of caffeine. A cup of black tea, considered one of the teas with the highest concentration of caffeine, on the other hand, would be around 50 mg. Considering that a standard cup of espresso coffee is 60 ml and a normal cup of tea usually holds about 200 ml, the difference is evident.

The theine ranking of teas

Although sources such as the United States Department of Agriculture (USDA) or the famous Mayo Clinic offer data on the theine content of each tea, we warn you that we are bordering on the terrain of speculation in this section. As we wrote at the beginning of the article, it is difficult to quantify caffeine simply by grouping teas by families.

We can say that black tea is a tea high in theine. According to the Mayo Clinic, a 237ml cup would contain between 25 and 48 mg of theine. The USDA puts an intermediate figure of 32 mg for a 200 g cup.

We can say that green tea is a low theine tea. According to the Mayo Clinic, a 237 ml cup would contain between 25 and 29 mg of theine. The USDA provides similar figures.

The amount of theine in oolong tea is highly variable. It must be remembered that this type of tea differs greatly from each other, having slightly oxidized oolongs, which are reminiscent of green and highly oxidized teas, which are close to black. According to the medical news portal Medical News Today , a 237 ml cup would contain between 10 and 60 mg of theine. The USDA states 47 mg per cup.

In this case factors come into play such as that chai tea is based on a mixture of black tea and spices that is infused in water and milk. The USDA establishes an amount of theine of 21.6 mg per 240 g cup, a low amount.

The fermentation process through which red tea passes would not influence the amount of theine present. At least, this concluded this study , which established the concentration of theine in pu ehr tea near 22 mg of theine per cup of tea. We can say that red tea is a low theine tea.

There are some sources of information that have analyzed the properties of white tea and established its concentration of theine around 28 mg per 237 ml cup, putting it in the ranges of low-theine teas.

How Much Caffeine Is Too Much?

Caffeine is toxic only in large doses. To give you an idea, an adult should consume more than 10 grams in a day to reach the level of toxicity. A cup of coffee contains between 80 and 175 milligrams of caffeine, so it would be necessary to consume between 50 and 100 cups of coffee.

It is also interesting to remember that caffeine consumption is discouraged for pregnant or lactating women. The less the better, but the consumption limit is set at 200 mg per day.

What is white tea?

There is some controversy over the exact definition of white tea. In general, this is the name given to those varieties that do not go through any elaboration technique, beyond drying . In addition, this name is also associated with the fact that this type is produced with shoots that are covered with a white fluff called Pekoe or Trichoma , which is intended to protect the plant from insects.

Unlike other varieties, the process to obtain white tea is simple; no need to wash, roll or filter. In fact, the technique consists of exposing the shoots and the first leaves that are harvested to the sun until the point that they wilt.

This step is done outdoors but is sometimes done in sheds with proper ventilation to avoid problems associated with wind, humidity or rain. By drying, the shoots and leaves lose water. With this, the characteristic aromas and flavors of this infusion emerge.

Unlike black and green teas, which provide intense flavors and a drying effect, it undergoes minimal oxidation (also known as fermentation ) that results in a light and delicate aroma and flavor . White tea is native to China, but today it is also produced in other countries such as Taiwan, India, northern Thailand, and eastern Nepal.

See also: How much water should you drink daily part 3?

According to the study “Healthy Properties of Green and White Teas: An Update”, this type of tea contains 15% less caffeine than traditional green tea. In general, this value can vary between 6 to 55 milligrams per cup (250 milliliters) and it depends on different factors.

For example, the Silver Needle ( Bai Hao Yin Zhen ) variety , one of the most acclaimed, contains the least amount of caffeine. Unlike others, it is only made from tea buds and not the leaves.

Because the white fluff that covers them makes it difficult to extract caffeine, the content of the final product is limited .

Processing and collection that is used

In general, the brands that are marketed employ different processing techniques. For example, some companies use more drying time and others collect the shoots and leaves at different times. All this ends up influencing the final caffeine content.

The more the tea is crushed (with a similar aspect to the powder), the greater the amount of caffeine it contains. On the contrary, scientific studies indicate that those sold in sheets contain less.

The way the infusion is prepared also plays a role . In fact, if you use hot water (above 90 degrees) and if it is allowed to sit for longer than usual (between 7 to 10 minutes), the caffeine content will increase.

For this reason, experts suggest that you do not take more than 5 minutes to prepare it if you want to avoid excess of this substance. Otherwise, you will be stimulating the passage of it to the infusion.

Are there caffeine-free alternatives?

If you want to drink white tea that does not contain caffeine, you can opt for decaffeinated, although this option usually has higher prices than others. However, it may still contain trace amounts of this element.

It is advisable, in any case, that you try different infusions that do not come from the Camellia sinensis plant but are made with other herbs, spices or even nuts.

Discover more: what is the best drink for high blood pressure?

What health benefits can white tea have?

As mentioned, white tea also provides antioxidant substances that are capable of generating beneficial effects on the human body. In relation to this issue, studies indicate that thanks to these components, the regular intake of the infusion has a remarkable role in the prevention of diseases.

Its preventive and regulatory action has been recorded in type 2 diabetes and neurodegenerative disease. In the same way, the immune system is strengthened by the action of white tea.

Caffeine in white tea is minimal, but it’s there

Although this drink has a contribution of caffeine, its content is insignificant compared to that of other varieties such as black or green tea. Of course, if your doctor recommends avoiding it for a particular situation, you can play it safe and buy the option that is decaffeinated or consume an infusion that is made with other herbs.

Factors that affect the caffeine level of your tea

Both within tea and coffee, we can find varieties that respond to different methods of preparation, ways of drinking the drink or characteristics of the leaves or berries that have been the origin of the preparation.

All these factors affect the amount of caffeine that the resulting preparation will have. Let’s review them.

In any case, consider that having just one cup a day would not be counterproductive to your health, but you could even notice different benefits for your body. So do not despair about it and evaluate what is most convenient.